Menu
This post may have affiliate links. If you click one of these links and make a purchase, we will be paid a commission at no additional cost to you. 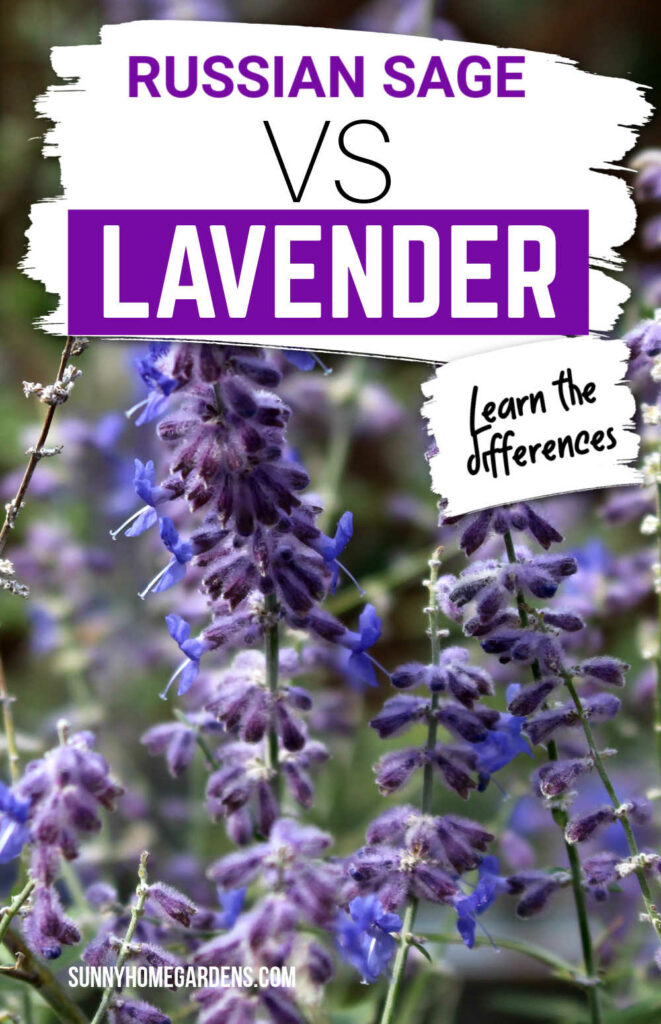 Wondering about Russian sage vs lavender and what the differences are? Find out how they differ.

Russian sage and lavender are very similar in height, floral production, and the environmental conditions in which they grow.

The main difference between the two plants is the color of the flowers and the length of time the plants will live.

Russian sage is also a more hardy plant than lavender.

The native environment of Russian sage is harsh and cold, featuring long, cold winters and very brief summers. The environment has enabled the plant to develop a natural resistance to cold weather and poor soil.

Lavender is native to the  Mediterranean where the climate features hot, dry summers and cool, wet winters.

Lavender can withstand the summer heat and drought but does not fare well in regions that have long, cold winters.

Which One Should I Grow?

The right plant for your landscape will be determined by your climate.

The USDA growing zones for each plant are almost the same – zones 4-9 for Russian sage and zones 5-8 for lavender – but it’s the micro-climates within those growing zones that will produce happy or unhappy plants.

Even though lavender is recommended for USDA Hardiness Zone 5, the northern-most part of zone 5 has winter temperatures between negative ten and negative twenty degrees Fahrenheit.

Lavender plants will probably not survive the first winter in zone 5 and Russian sage will be the best choice.

USDA Hardiness Zone 8 is one of the warmest zones and encompasses much of the southern quarter of the United States.

Growing zone 9 goes farther south and encompasses some of the hottest climates in the United States. However, some of the warm zone 9 states are dry climates and some are wet climates.

Florida, Georgia, Alabama, Louisiana, Mississippi, New Mexico, Arizona, Texas, Nevada, California, Oregon, Washington, and Hawaii are in zone 9 and range from climates with oppressive heat and humidity, which is ideal for the rain forests and swamps which are thriving there, to the hot, dry, arid climates that good for cacti and reptiles.

Russian sage is best for the lower portion of zone 8 and all of zone 9.

Russian sage is a plant in the mint family (Lamiaceae) but is not the same as the sage commonly used as a culinary herb.

It belongs to a class of shrubs called subshrubs. It’s deciduous and new growth comes each year from a woody base and Russian sage flowers are produced on the new growth.

Russian sage is a vigorous, hardy, heat-loving, low-maintenance, and drought-tolerant plant that resists deer and pests.

Although it is from Russia, this airy plant has the character of Western sagebrush.

Lavender (Lavendula spp.) is a well-known and fragrant perennial plant.

Growing lavender successfully will depend on growing conditions and which variety is planted.

Lavender plants will tolerate many growing conditions, but they thrive best in warm, well-drained soil

The aromatic lavender leaves and fragrant flower spikes make this plant misrepresented as an herb. But it is an herbaceous perennial with a semi-woody growth habit.

In warmer regions, its gray-green foliage stays evergreen throughout the year. In colder regions, lavender is a deciduous plant.

While we tend to think of lavender as only producing lavender-colored blooms, flower colors include purple, deep blue, light pink, and white.

Lavender will grow at a moderate pace and the mature plant will reach 2-3 feet tall and 2-4 feet wide. It won’t tolerate shade.

If you plant Russian sage in a partly shaded location, it will sprawl instead of grow upright. The plant will reach a mature size of 3-feet tall and 3-feet wide.

Both Russian sage and lavender should be planted in sunny locations with at least 6 hours of full sun per day to produce the best flowers.

Both plants will only need water occasionally when planted in-ground; more often in extreme heat or in containers.

Russian sage blooms in mid-summer and into fall.

Maintenance for Russian sage consists of nothing more than pruning.

When new spring growth emerges, cut the old stems back to just above the lowest set of leaves.

You can feed the plant as soon as it’s pruned but it’s not necessary.

Russian sage can easily be over-wintered in colder climates by pruning the plant back to 1-foot and adding a 3-inch layer of pine needles on top of the plant after it has died back in the fall.

This will keep the soil a consistent temperature and prevent heaving.

Remove the pine needles in spring when new growth emerges.

This plant will make a good hedge row or boundary plant.

Climates that have mild winters can allow the stems and seed pods to remain on the Russian sage plant until spring to create winter interest in the landscape.

Light pruning of lavender in the spring and after the blooms begin to fade will promote more blooms, increase air circulation, and prevent root rot.

Plants seeds or seedlings in the spring after the risk of frost has passed and the soil has warmed up.

Do not add compost or other organic material to the soil before or after planting.

Do not feed lavender plants. Feeding them will inhibit, perhaps even stop, bloom production.

It is one plant that thrives in poor soil conditions and develops a higher concentration of oils and produces more blooms when grown in poor soil.

When growing lavender in containers, be sure to add soil to the potting mix to encourage drainage.

A chalky soil will intensify the fragrance of the blooms, while soil pH below 6.5 will shorten the lifespan of the plant.

When first starting lavender plants, water them consistently during their first growing season.

After that, they can handle extended periods of drought without being watered. Overwatering the plants will lead to fungal disease and root rot.

Lavender is not overly sensitive to temperature changes but it can’t tolerate dampness.

It’s the dampness rather than the cold that’s the primary killer of these fragrant plants. Dampness can come in the form of wet roots during the winter months or high humidity in the summer.

If high humidity during the summer is a problem, be sure to have plenty of space between the plants for airflow and always plant them in a full sun location.

These plants are easy to maintain but leaf spots and root rot will occur if the soil is too wet.

Protect the plants from harsh winter winds by planting them next to a structure or wall that will provide heat and protection.

If the ground routinely freezes and thaws throughout the winter in your climate, add a 3-4 inch layer of organic mulch around the plants after the ground initially freezes to protect the roots.

This is not a plant that is dependable enough to use to create a hedge row.

Lavender is lovely and fragrant but will only grow well when the weather cooperates.

Be prepared to experience the loss of a plant or two after a severe winter or a wet, humid summer.

Lavender is not long-lived and most plants begin to decline in 8-10 years. Starting new plants each year will ensure the bloom color and fragrance will be in the landscape year after year.

Lavender can be toxic to pets like dogs and cats, Russian sage is not. If you have pets take this into consideration when choosing which flowers to plant in your landscape.

Lavender repels deer and is good to use around the perimeter of a garden to help keep the deer away but only if pets are not in the area.

Uses for Russian Sage and Lavender

While Russian sage is not used in culinary applications like the common sage herb, the plant still has many uses.

The plant’s flowers are edible and have a peppery flavor.

The leaves of the Russian sage plant aren’t very tasty but they can be used as a garnish or used to make a tea that will ease digestive discomfort.

The leaves can be dried and used to make a fragrant potpourri and the dried stalks are attractive when added to a dried floral arrangement.

It’s typically grown for its leaves and flowers that are dried and used to make sachets and potpourri.

The essential oils in the plant are used for aromatherapy and in many bath and beauty products.

Make sure to “PIN IT” for later and follow Sunny Home Gardens on Pinterest for all the latest posts about plants! 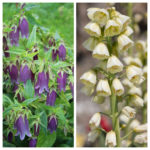 We are a participant in the Amazon Services LLC Associates Program, an affiliate advertising program designed to provide a means for us to earn fees by linking to Amazon.com and affiliated sites

We are a participant in the Amazon Services LLC Associates Program, an affiliate advertising program designed to provide a means for us to earn fees by linking to Amazon.com and affiliated sites

Back to Top
Close